"Make straight in the desert a highway... Every valley shall be lifted up, and every mountain and hill be made low; the uneven ground shall become level, and the rough places a plain." 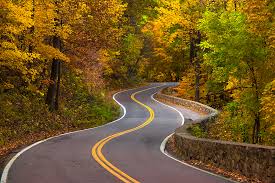 Across our American terrain we bridge valleys and rivers and cut and tunnel through mountains and smooth badlands in a manner befitting Isaiah's God. Straight, smooth, level highways - the shortest possible distance between point A and point B.

Not so long ago we thought that such highways would solve our transportation problems. At the beginning of 20th century, the privileged few who could afford an automobile faced the worst roads in the nation's history. They had been long neglected because as a nation we had been more dependent on and concerned about railroads. Those early road warriors gloried in their tales of hardships on the road - sand and mud and ruts that swallowed wheels and broke axles.

Not only were the roads bad, but they weren't well integrated, and left vast areas of the country unconnected. Here is what Henry Joy, President of the Packard Motor Company, discovered when he tried to drive across the United States:

He found that the roads ended completely somewhere in Nebraska. A man in Omaha gave him instructions: drive west from town until you reach a fence. Open the fence, drive through and close it. Do this several times. Joy followed the instructions, he recalled later, until finally the fences ended and there was "nothing but two ruts across the prairie"

As we all know, when highway traffic slows, tempers rise. Aggressive driving, road rage, ordinary Jekyll-citizens metamorphosing into sociopathic, ranting, deadly Hydes -- we've all seen it or felt it. What can we do?

Whatever we do, we know that adding capacity won't solve the traffic problem, nor will it solve the time problems we have in our own lives. Adding more capacity, more time, will not treat the basic issues of how to unclutter our lives and prepare for the coming of the Lord.

In fact, there are a few possibilities to explain the congestion and frustration in our lives as we enter this Advent season. We might consider that as we start packing to meet God, we may be on the wrong highway. God may not be found on the roads of consumerism and materialism that we're traveling. If we find that our lives are full of gridlock, it's because we're on the same road as everyone else. Time to get off that road and onto another.

Even if we are on God's road, it may need some smoothing out. It is very easy for seasonal and distracting potholes to create a bumpy ride on the way to meet God.
Posted by Province of Meribah at Saturday, December 06, 2014