Starting on the First Week of Advent (the weekend of November 29, 2014) and concluding on the World Day of Consecrated Life (February 2, 2016), this fourteen-month period is meant to be a special recognition of the significant role of religious men and women and their unique witness to the kingdom of God in this world. 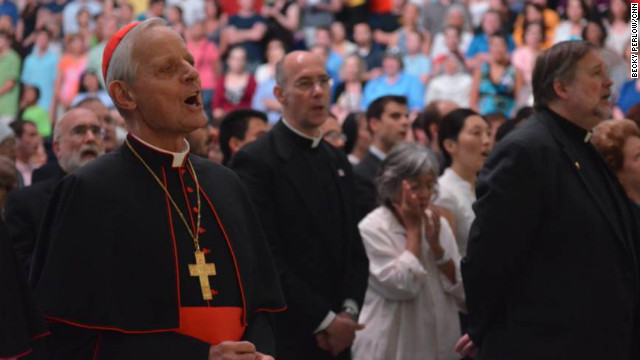 In his homily, Cardinal Wuerl referenced the document published by the Vatican Congregation for Religious entitled, A Message from the Teaching of Pope Francis, meant to aid in the reflection of the role played by religious men and women. “I want to say one word to you and this word is joy. Wherever consecrated people are there is always joy!” said Cardinal Wuerl, quoting the Holy Father’s words from the message. He then went on to explain, “The background against which we recognize the joy of religious life is of course the value or worth of consecrated commitment and its unique witness in the world. This vision is found in the Gospels and particularly in the longstanding appreciation of the extraordinary witness to the reality of God’s kingdom that is religious life.”

“In the word that is proclaimed, the Spirit of God is present. In the Eucharist that is celebrated, Christ and his redeeming action takes place. Reflecting this realization that the kingdom of God is actually breaking into our world, religious life stands as a witness to the kingdom already being realized in our world,” said the Cardinal. He then reminded those present that poverty, chastity and obedience, the vows taken by those who profess religious life (also known as “evangelical counsels”) and are the core of religious life are based upon the words and example of the Lord. He continued, “The heart of religious life is, of course, the call, then the response, and then the life of witness. Each of us can remember how we heard the call. For some it was sharp and clear, for others it was the result of a longer process and for still others it was more a sense of fulfillment of a life-long direction. Yet for all of us it was clearly a call.”

The Cardinal then cited several of the many expressions of religious life: “...we can turn to Saint Anthony, the founder of monastic life, and his commitment to the pursuit of perfect communion with the Lord. Both Saint Benedict and his sister Saint Scholastica offer us examples of religious life lived according to a rule of holiness. Two equally engaging founders of religious communities are Saint Francis and Saint Clare with their total self-giving to God and their dedication to the poor. Saint Dominic offers us another example of religious commitment.” He continued, “In our own land we have the extraordinary examples of Saint Elizabeth Ann Seton and Saint John Neumann. All of these are examples of a response to God’s call.”

“Today all of us are asked, each of us individually, to renew once again our consecration to Christ, his Church, his people. Pope Francis invites us to recall again the moment when we first encountered the Lord. The Holy Father tells us to remember ‘The joy of the moment when Jesus looked at me.’ Our vocation, he says, ‘is a response to a call, a call of love,’” said the Cardinal, referencing the message issued by the Vatican Congregation for Religious.

“My prayer is that as we do this each of us will once again feel that same uplifting joy, that powerful presence of God’s Spirit, that overwhelming confidence of God’s providential calling as we reaffirm our response to Jesus’ call ‘follow me,’” said the Cardinal, and thanked the religious and their communities their presence in the archdiocese, and for their work and witness.