The Kingdom of God

Pope Francis: “The Kingdom of God is close to us everyday”

From his homily this yesterday morning:

In the silence of a home, where there may only be 50 cents left until the end of the month, but where there is always prayer, care for children and grandparents, there is the Kingdom of God. Far from the noise of the crowd, because the Kingdom of God “does not attract attention” in the same way a seed that grows underground does not attract [attention]. 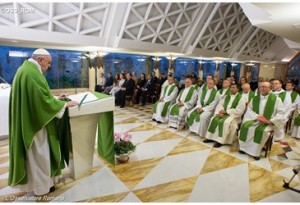 Pope Francis continued noting that celebrations are often transformed into spectacles – weddings for example – where people seem more intent on putting on a “fashion show, being seen, vanity” rather than receiving the Sacrament. Instead “the Kingdom of God is silent, it grows inside. The Holy Spirit nourishes it through our willingness, in our land, which we have to prepare”. Then, quoting the words of Jesus, the Pope said the day will come when the Kingdom will be manifest in all its power, but it will only be the end of time:

“The day when he will make noise, he will flash like lightening, lighting up the sky from one side to the other. So shall the Son of man be on his day, the day that he will make noise. And when one thinks of the perseverance of many Christians, who struggle to raise their family – men, women – who care for children, care for grandparents and arrive at the end of the month with only half a euro, but who pray. There is the Kingdom of God, hidden, in the holiness of daily life, every day holiness. Because the Kingdom of God is not far from us, it is near! This is one of its features: it is close to us everyday”.
Posted by Province of Meribah at Friday, November 14, 2014