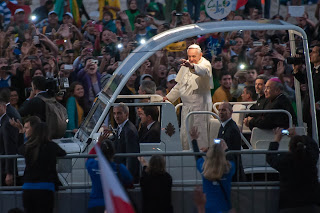 Even when the crowds cheer him at his audiences, Francis reminds them, “cheer for Jesus, not for me”

Yesterday in the Washington Post, the world seems determined to make an idol of Pope Francis. That’s what the world does.

We think of pop stars as “idols” but an idol, more correctly, is the thing or person best capable of delivering an affirmation of ourselves to ourselves. “We are the ones we have been waiting for,” claimed Barack Obama in 2008 and the fainting, adoring crowds could not get enough of the man who once described himself as a “blank screen on which people…project their own views,” because they could not get enough of themselves.

It has only been six months since Jorge Mario Bergoglio came to the world with a new name, but already MSNBC’s Chris Hayes, channeling his inner tween has gushed, “is it too early to say Francis is the best pope ever?”

His effusion prompts a different question: Are we, like the ancient Jews at Mount Sinai, and Americans in 2008, molding Francis into an image and polishing him to a high gloss, that we might better see ourselves reflected in him? Are we treating him as we would a god?

If our nature is to create idols, it almost cannot be helped. As with Obama, the crowds adore Pope Francis, whose message is not so much “yes, we can,” but “yes, God does” — love us, forgive us, seek our trust; we are the ones God is waiting for, as the father awaits the prodigal.

Francis repeatedly returns to themes of compassion, mercy, tenderness and his words drop like healing dew upon people feeling increasingly isolated from each other, and distanced from God. Whether from a Jeep trundling around Saint Peter’s Square or from an open-sided vehicle on the Argentine streets, Francis reaches out to the people in complete freedom and fearlessness, and the crowd reaches back. The crowd wants to be like him —able to love and trust God, and the world, and finally themselves.

What saves this from becoming simple idolatry is Francis’s continual exhortation that we fix our attention, and our intentions, upon having an authentic and lifelong encounter with Jesus. He says, in essence, you want to be like me? I want to be like Jesus; look at him!
Posted by Province of Meribah at Thursday, September 19, 2013