Teach by every word, look and gesture 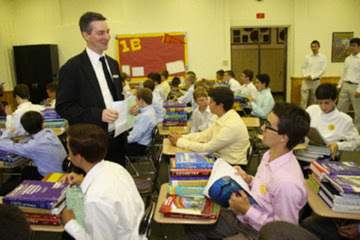 So, school has started. And teachers are preparing their lessons. They have decorated their classrooms.

One of the many questions teachers ask is: How can I keep my student's attention after I start speaking in class? How can I keep them from falling asleep? What must I do to make it virtually impossible for my student's not to listen and keep listening?

But some help comes from a recent study that sheds new light on why people listen when they listen, while confirming what people have believed for a long time.

In an article, “How to Get — and Keep — Someone’s Attention, Annie Murphy Paul, author of the forthcoming Brilliant: The Science of Smart, points to some recent studies by several educational research organizations funded in part by the Bill and Melinda Gates Foundation. One study involved the use of galvanic skin response sensors in the classroom. Some critics call them “mood bracelets” and “educational pedometers.” They are devices worn around the wrist that gauge the user’s physiological arousal by measuring the amount of sweat on the skin. “The idea,” Paul writes, “is that a teacher instructing a roomful of students wearing the devices would instantly know who was engaged and who was bored or distracted.” There are problems of course. The student might be sweating because there’s an exam coming up next period.

At Kennesaw State University in Georgia, a physics professor recently reported the results of an experiment in which students wore special glasses that could plot or track where and how long wearers direct their gaze. Undergrads were students while attending lectures, and what emerged from the data was that “it was not the case, as many teachers believe, that students were most engaged for the first 15 minutes or so of class, after which their attention gradually slacked off.” Instead, a student’s attention ebbed and flowed through the course of the 70 minute lecture.

Imagine the possibilities! Teachers being able to teach for 70 minutes!

What actually happened is that a student’s attention would spike whenever the professor used “humor, stood close to the student, or talked about material that was not included in the Power Point presentation projected on a screen at the front of the room.”

It was also found that cell phones and the web — especially Facebook — were the greatest obstacles to maintaining students’ engagement in the classroom.

From these studies, Paul moves forward in her article to suggest some strategies for keeping students engaged.

Stimulate curiosity. Dan Willingham, a cognitive scientist at the University of Virginia, says that sometimes teachers “are so eager to get to the answers that [they] do not devote sufficient time to developing the question … but it’s the question that piques people’s interest. Being told an answer doesn’t do anything for you.”

Introduce change and surprise.   It’s axiomatic that the attention span of the post-modern Western homo sapiens has shrunk considerably over past 20 years. We get bored—easily. Therefore, the teacher needs to mix it up, and to do so often, perhaps every seven minutes or so. So shake things up. Surprise your audience. When that happens, your audience will not be able to ignore what’s being said.

Stress relevance and concreteness. Paul writes: “The human mind can’t handle too much abstraction. Bring your ideas down to earth by explaining how they connect to your listeners’ lives, and by embedding sensory details — what things look, sound, feel and taste like — into your account.”

Tell stories. Again, Paul says: “Researchers who study human cognition say that stories are 'psychologically privileged' — that is, our minds treat them differently than other kinds of information. We understand them better, remember them more accurately, and we find them more engaging to listen to in the first place.

Fiddle with some of these ideas and you’ll find they will improve the teaching experience.

Other factors need to be considered, such as vocal issues, body language, use of notes, and so on, but that gets us into some different aspects. For now, stimulate curiosity, introduce change and surprise, stress relevance and tell stories.

Amen!
Posted by Province of Meribah at Wednesday, September 04, 2013