The Call of St. Matthew

Perhaps the most revealing detail in Pope Francis’s lengthy interview, conducted by the Italian Jesuit Antonio Spadaro and published yesterday in English translation in the Jesuit journal America, is the pontiff’s reflection on one of his favorite Roman walks, prior to his election:

When I had to come to to Rome, I always stayed in [the neighborhood of the] Via della Scrofa. From there I often visited the Church of St. Louis of France, and I went there to contemplate the painting of “The Calling of St. Matthew” by Caravaggio. That finger of Jesus, pointing at Matthew. That’s me. I feel like him. Like Matthew. . . . This is me, a sinner on whom the Lord has turned his gaze. 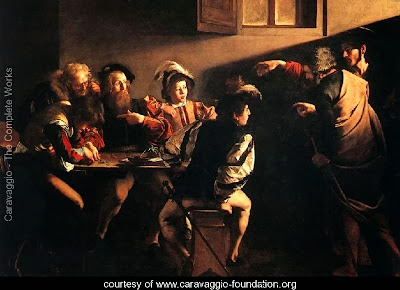 The Calling of St. Matthew is an extraordinary painting in many ways, including Caravaggio’s signature use of light and darkness to heighten the spiritual tension of a scene. In this case, though, the chiaroscuro setting is further intensified by a profoundly theological artistic device: The finger of Jesus, pointing at Matthew, seems deliberately to invoke the finger of God as rendered by Michelangelo on the Sistine Chapel ceiling. Thus Caravaggio, in depicting the summons of the tax collector, unites creation and redemption, God the Father and the incarnate Son, personal call and apostolic mission.

That is who Jorge Mario Bergoglio is: a radically converted Christian disciple who has felt the mercy of God in his own life and who describes himself, without intending any dramatic effect, as “a sinner whom the Lord has looked upon.” Having heard the call to conversion and responded to it, Bergoglio wants to facilitate others’ hearing of that call, which never ceases to come from God through Christ and the Church.

And that, Bergoglio insists, is what the Church is for: The Church is for evangelization and conversion. Those who have found the new pope’s criticism of a “self-referential Church” puzzling, and those who will find something shockingly new in his critical comments, in his recent interview, about a Church reduced “to a nest protecting our mediocrity,” haven’t been paying sufficient attention. Six years ago, when the Catholic bishops of Latin America and the Caribbean met at the Brazilian shrine of Aparecida to consider the future, the archbishop of Buenos Aires, Bergoglio, was one of the principal intellectual architects of the bishops’ call to put evangelization at the center of Catholic life, and to put Jesus Christ at the center of evangelization. The Latin American Church, long used to being “kept,” once by legal establishment and then by cultural tradition, had to rediscover missionary zeal by rediscovering the Lord Jesus Christ. And so the Latin American bishops, led by Bergoglio, made in their final report a dramatic proposal that amounted to a stinging challenge to decades, if not centuries, of ecclesiastical complacency:

The Church is called to a deep and profound rethinking of its mission. . . . It cannot retreat in response to those who see only confusion, dangers, and threats. . . . What is required is confirming, renewing, and revitalizing the newness of the Gospel . . . out of a personal and community encounter with Jesus Christ that raises up disciples and missionaries. . . .

A Catholic faith reduced to mere baggage, to a collection of rules and prohibitions, to fragmented devotional practices, to selective and partial adherence to the truths of faith, to occasional participation in some sacraments, to the repetition of doctrinal principles, to bland or nervous moralizing, that does not convert the life of the baptized would not withstand the trials of time. . . . We must all start again from Christ, recognizing [with Pope Benedict XVI] that “being Christian is . . . the encounter with an event, a person, which gives life a new horizon and a decisive direction.”

The 21st-century proclamation of Christ must take place in a deeply wounded and not infrequently hostile world. In another revealing personal note, Francis spoke of his fondness for Marc Chagall’s White Crucifixion, one of the most striking religious paintings of the 20th century. Chagall’s Jesus is unmistakably Jewish, the traditional blue and white tallis or prayer-shawl replacing the loincloth on the Crucified One. But Chagall’s Christ is also a very contemporary figure, for around the Cross swirl the death-dealing political madnesses and hatreds of the 20th century. And so the pope’s regard for Chagall’s work is of a piece with his description of the Catholic Church of the 21st century as a kind of field hospital on a battlefield strewn with the human wreckage caused by false ideas of the human person and false claims of what makes for happiness. Thus Francis in his interview on the nature of the Church:

I see clearly that the thing the Church needs most today is the ability to heal wounds and to warm the hearts of the faithful; it needs nearness, proximity. I see the Church as a field hospital after battle. It is useless to ask a seriously injured person if he has high cholesterol and about the level of his blood sugars! You have to heal his wounds. Then we can talk about everything else. Heal the wounds, heal the wounds
Posted by Province of Meribah at Saturday, September 21, 2013