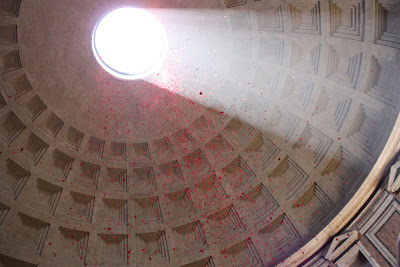 Pentecost has been one of the most unique and creatively celebrated days on the church's calendar. In 10th-century Rome, for example, the church really knew how to throw its own birthday party. In order to make the coming of the Holy Spirit a dramatic, dynamic event for their congregations, leaders of Pentecost services involved architecture, not just anthems.

The custom of painting heavenly scenes on the great domed and vaulted ceilings of cathedrals served not only to inspire the devout with blessed visions. It also disguised some discreet trap doors. These small openings were drilled through the cathedral ceiling to the rooftop. During the Pentecost service, some hapless servants would be drafted to clamber up on the roof. At the appropriate moment during the liturgy, they would release live doves through these holes. From out of the painted skies and clouds on the cathedral ceiling, swooping, diving symbols of a vitally present Holy Spirit would descend toward the people below.

At the same moment, the choirboys would break into the whooshing and drumming sound of a holy windstorm. Finally, as the doves were flying and the winds were rushing, the ceiling holes would once again be utilized -- as bushels upon bushels of rose petals were showered down upon the congregation. These red, flickering bits of flowers symbolized tongues of flame falling upon all who waited below in faith.

They called these openings to the sky in medieval churches "Holy Spirit holes."
Posted by Province of Meribah at Friday, May 17, 2013