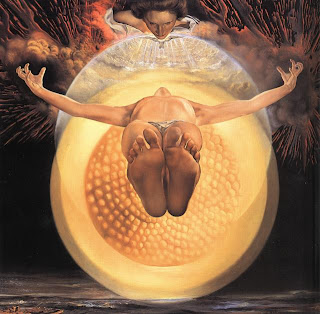 EXPERIENCING THE ASCENSION
By Amanda Grassi


Last week at bible study, we had Lectio Divina and discussed this Thursday’s gospel (the Feast of the Ascension: Luke 24:46-53). As I was listening, verses 51 through 53 struck a chord with me. “Then he led them out as far as Bethany, and lifting up his hands he blessed them. While he blessed them, he parted from them, and was carried up into heaven. And they returned to Jerusalem with great joy…” Let me try to walk you through my thought process with these verses. The first time I heard it, I was thinking, “man, that would be so sweet to have Jesus bless me! I wish I had been there!” I think that standing in front of Jesus fully man and fully God and then, on top of simply being in his presence, receiving his blessing, I would be left speechless. Then all of a sudden the huge gift of the priestly blessing that we receive at Mass clicked with me. If that wasn’t enough, then I was struck by the thought of the blessing that we are honored with by Jesus himself at Benediction. Its really kind of mind-blowing when you think about it.


The second and third time we went through the readings, a much different thought took hold of me. I was picturing myself there, among the apostles who were “seeing Jesus off” and I asked myself, “how would I react in that moment?” The gospel tells us that the apostles were filled with joy; I imagine I would feel something a little different though—I would feel sadness, I would be upset that Jesus was leaving. I pictured myself with the same feelings that a little girl has who is upset as her parents get ready to leave her with a babysitter for the evening. I could just hear myself crying, “But, Jesus, I don’t want you to go. Can’t you just stay here?”

Oddly enough, I think this was a kind of break-through for me. Other times, when I’ve read scripture and found the disciples react in the “wrong” way, for example, when Peter protests to Jesus’ having to be crucified, I would think, “Peter, don’t be dumb, he’s gotta do it.” Of course, hind-sight is 20/20. It was really beautiful though, because all of a sudden, I found myself having that same “wrong” reaction, but then realized that its not wrong at all—its personal, its authentic, its me. Pretending that I would have felt something different wouldn’t have been real. When I’m real with God, then he can meet me where I am. I could picture Jesus putting his cloud into neutral and hanging back to smile down at me and say what he had told the disciples before, “Amanda, you know that I love you, ‘[b]ut I tell you the truth, it is better for you that I go. For if I do not go, the Advocate will not come to you. But if I go, I will send him to you’“ (John 16:7).

His response, full of grace and love, showed me that my reaction wasn’t “wrong,” but was actually a necessary step in revealing an area that I need to grow in. I need to trust more. I need to believe that the Father loves me and therefore that he wouldn’t do anything without my best interest at heart. I have to believe that God sometimes does things that I don’t understand and that may fill my heart with grief (see John 16:6), but it is not because he has forsaken me, but because he loves me.

The disciples had that faith that I want, but they had to learn it. Throughout their time with Jesus, they feared, doubted, and were grieved many times, but they grew to trust as they came to know him in a deeper way and repeatedly saw him fulfill all that he promised. By the time of Jesus’ ascension, they were free to rejoice in his going away because they knew he would do all that he said: he would send the advocate and he would come back. If I know Jesus, then I can trust him. And if I trust his word, I’ll be able to endure even in the midst of sorrow or confusion because I know it will one day be turned to joy. Lord, please grant all of us the grace to know and to trust you! Amen.
Posted by Province of Meribah at Friday, May 10, 2013