St. Lawrence teach us to laugh 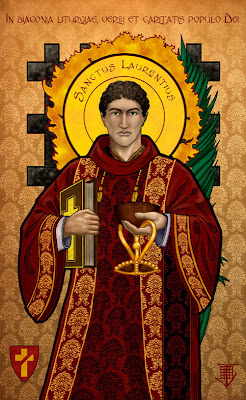 Today we celebrate the feast of St. Lawrence, a martyr and deacon of the 3rd century. St. Lawrence is known primarily for two features, which are reflected in our readings today: his care for the poor and his martyrdom. Throughout his life he maintained a sense of humor that made him the patron saint of comedians.

One day, the Roman government demanded that Lawrence turn over the riches of the Church.  Now, Lawrence knew that there was no purpose to hiding the Church’s treasures. So he asked for three days to gather everything together. During those days he sold every chalice and artwork and other item that is valuable as the world sees things. He gave the proceeds to the poor. On the third day he returned and presented the true riches of the Church: the blind, the lame, the leprous, and many other people. He is reported to have said, “As you can see, we are richer than the emperor.” So they killed him. They grilled him to death. I suppose they had a giant barbeque, lit a fire, and threw him on it. As he was dying, he supposedly said to his guards, “You can flip me over now; I am done on this side.”

And what can we learn from the comedy routines of St. Lawrence? In the face of the world, we ought to laugh, recognizing how ridiculous the world is. People live and die for money and power. We live and die for Jesus Christ. The contrast is so enormous.
Posted by Province of Meribah at Friday, August 10, 2012