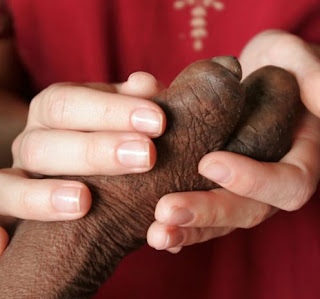 Today’s reading from the Gospel of Saint Mark gives us an opportunity to think about a type of conversion. Call it the Divine Touch, the turning-point moment when Jesus touched a man with leprosy and everything in that man’s life changed. He who had been separated from his family, community, temple and friends by disease, who was considered unclean and made an outcast because of the wasting away of his flesh, now was made whole and enabled to join the mainstream crowd again. He went from outcast to cast in, from sickness to health, from unclean to clean, from brokenness to wholeness.

There was no technology in that day, but that didn’t stop this man from broadcasting what Jesus had done for him. He “proclaimed it freely” and “spread the word,” the Scripture says.

The Scripture reading does not say that this man experienced conversion in the religious sense of the word, which is how we often use it today. But in some ways, that makes this a good text from which to think about religious conversion, for it has more in common with other types of conversion than we might at first think. In the Bible, the Hebrew word for conversion is shub, which means “to turn” or “to return,” and the Greek word is metanoia, which means “to turn around.” In the case of this man Jesus healed, there was clearly a return, in that he could now go back to his family and community, but there was also a turning around.

To be converted means to have the direction of one’s life shifted, so that it no longer points toward self, but points outward to God. And that’s exactly what happened to this leper. He stepped off the “woe is me” path and onto the “Jesus is great” road.

The conversions we usually hear about, whether of a religious nature or of some other type, are often accompanied, at least initially, by excitement, zest, intensity, an eagerness to tell others about it and efforts to make significant changes in one’s life. And often, the converted person looks back at the time of the conversion as a significant turning point.
Posted by Province of Meribah at Sunday, February 12, 2012