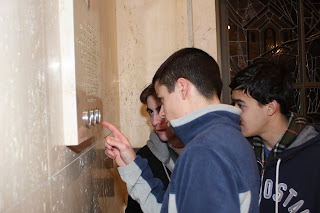 The 38th annual March for Life was held today and the Marianist schools were well reprented.
One of Marianist high schools travelled down to D.C. a day early and toured the Basilica of the National Shrine of the Immaculate Conception.

They also travelled across the street for a Vigil Mass prior to the March in the chapel of the Jeanne Jugan Residence.

A few years ago, a youth Mass was initiated for the day of the march. This youth Mass has been held at the Verizon Center, which is a large convention center in Washington. This year, they signed up participants online, but while so many people tried to sign up we still received our tickets

The Center holds about 20,000. It is an extraordinary venue because they traditionally put all the seminarians down on the main arena and the young people are sitting on the benches around them. Many bishops and priests concelebrate at the Mass. It is an extraordinary event with young people. I call it tantamount to a mini World Youth Day because the young people are exposed to the witness of thousands and thousands of their peers.
More than 27,000 young people secured tickets for the morning concert, pep rally and Mass, according to the Archdiocese of Washington. For the first time, a parallel event was held at the D.C. Armory to handle the overflow crowd. 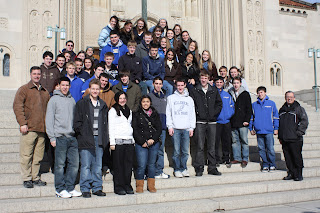 The Verizon Center event was part pep rally, part rock concert, with entire sections of worshipers standing up to cheer wildly for their local leaders as the names of bishops and archbishops on the platform were announced.

Posted by Province of Meribah at Tuesday, January 25, 2011