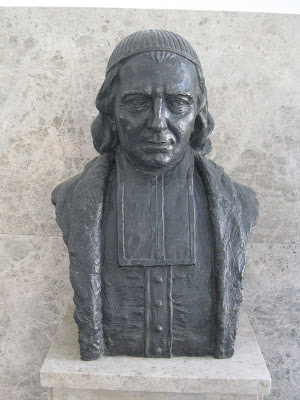 Chaminade - A Man of Faith & Vision

To the south of Bordeaux a road leads down across the Pyrenees into Spain. This was the road Father William Joseph Chaminade followed into exile in September of 1797.

He was a French priest in disguise, escaping the enemies of the Church in his native land. Close by lay the danger of arrest. Other priests had already died as martyrs.

But Father Chaminade was at peace. He was a man of faith.

The night before his journey into exile Father Chaminade wrote:

“What is a faithful man to do in the chaos Of events which seem to swallow him up? He must sustain himself calmly by Faith. Faith will make him adore the eternal plan of God .Faith will assure him that to those who love God all things work together for good.”

In Saragossa, Spain, near the Shrine of Our Lady of the Pillar, Father Chaminade settled down to wait out his exile. Here he prayed and planned for his future work. And here he received from Our Lady a special message. He was to be Mary’s missionary. He was to found a society of religious who would work with her to restore the Faith in France.

Two of Father Chaminade’s favorite prayers reveal the intensity of his love of God and of Mary:

The most just, most high, and most amiable will of God be done, praised, and eternally exalted in all things!

May the Father and the Son and the Holy Spirit be glorified in all places through the Immaculate Virgin Mary.
Posted by Province of Meribah at Monday, October 19, 2020