Jesus - identifies with our suffering 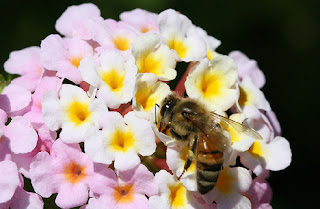 There is a monk in the mountains that is concerned about something most people swat and try to eliminate. Our story today is about a monk and bees. Honeybees.

They're capricious little critters. But cross them just once, and they'll zing you and sting you.

So you've got to wonder why a monk named Remy Rougeau spends so much time with them.

On days like today, when heavy snowfall blankets the upper Midwest, Remy puts on his snowshoes and walks two miles over prairie hills with a shovel. He passes antelope, snowy owls and jackrabbits. Mule and whitetail deer are everywhere. One year, a porcupine was hanging around the bee yard. His reason for making this trek is to clear the snow off the honeybee hives, because if hive entrances are covered, the bees can suffocate.

But Remy does more than simple snow-clearing. Throughout the year, he keeps some bees at the abbey so that he can sting himself.

Sting himself. On purpose. Each week he takes a bee in the knee. A local allergy specialist suggested this. "Years ago," he recalls, "when I was first assigned the apiary, I nearly choked to death when a bee got into my suit and stung me in the neck. I was far from help and not breathing well. Fortunately, I had an anaphylactic kit ... and after three injections of epinephrine my throat began to relax. Later, after the allergist thoroughly tested me, he suggested regular exposure to venom. And nowadays, I have no reaction to bee stings at all. They hurt for 10 seconds and it's over."

Exposure to venom. It's not a deadly thing for Remy Rougeau. In fact, it's the poison that enables him to maintain his passion for the honeybees.

In a certain way we should open our eyes and see that God loves us in the same way that this monk loves his honeybees. God adores us despite the fact that we are unpredictable little buzzers, responsibly making honey one second, and then aiming our stingers and shooting venom the next.

According to the letter to the Hebrews, God made Jesus - the pioneer of our salvation - "perfect through sufferings." Jesus exposed himself to our venom so that he could identify completely with our suffering and death, and so that he could have a full understanding of the human condition.
Posted by Province of Meribah at Thursday, October 01, 2020