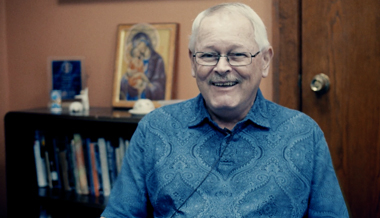 Shortly after he entered the Trappists, Thomas Merton wrote up the story of his conversion and journey to a monastery in a book, Seven- Story Mountain. It became a best-seller that, among other things, caught the romantic imagination of his generation. For years afterwards, Trappist monasteries were flooded with applications, not all for the right reasons of course, but a large number of men did become good monks because of a romantic ideal that Merton’s story triggered.

The absence of this kind of romantic ideal is, to my mind, one of the main reasons why today, in the Western world, fewer and fewer men and women are responding to the call to priesthood and religious life.

We need again an ideal for priesthood and religious life that people can fall in love with, something that inflames the romantic imagination. That’s absent today. Our very sophistication, it seems, is killing us. We are openly weary and often cynical about these vocations. No surprise we get few takers. “No romantic illusions allowed!” seems to be the catch-phrase. If we applied that criterion to marriage there would be few takers there as well.

Mature commitment, at a point, depends upon wilful decision and not upon naivete, romantic feelings, conscriptive duty, or lack of other opportunities. I very much like an expression used by Marriage Encounter groups: “Love is a decision!”, they say. They’re right. We can, and often do, make commitments out of naivete, lack of opportunity, or romantic feelings, but we won’t sustain them long-term, at least not without resentment or infidelity, unless, at some point, we re-choose them in a new and purer way.

Maturity comes with that. We’re mature only when we choose to love, serve, obey, bow down, give over our freedom, and give over ourselves to someone or something because we know and accept that this is the right thing to do, irrespective of how we feel about it on a given day or what more attractive options might be beckoning.

But – that’s not true initially. First you have to fall in love! Every romantic, mystic, or poet, knows that. Married folks too know it. Granted, at some point after the honeymoon love has to become a decision, but that’s not what initially brings you to marriage. First you fall in love. You get seduced by an ideal. That ideal turns out to be partly an illusion, but it’s what’s gives you the courage to pull the trigger and give yourself over in the first place. “All miracles begin with falling in love!”, says Morris West. Most life-long commitments begin in the same way.

We need, again, to have a romantic ideal about the vocations of priesthood and religious life, otherwise we can expect still fewer priests, nuns, and religious brothers in the future.

That immediately raises the question: What makes for such a romantic ideal? What did Merton’s book have that present books on the priesthood and religious life do not have?

What works and what doesn’t? Mother Theresa’s ideal, for example, fires the romantic imagination for some, though not for others. She was a saint and her ideal of religious life, austere though it may be, is, if anything, wonderfully romantic. But why hasn’t it led to a deluge of young women banging on convent gates in the Western world?

Perhaps more interesting for us in a highly secularize context is the ideal of religious life that is depicted in Sister Helen Prejean’s, Dead Man Walking. Her story has some key similarities to Seven Story Mountain: Both are confessional, good works of art, make morality attractive, are subtly invitational, show religious life under a good light, are wonderfully romantic, and unearth the hidden monk and nun inside each of us. Both Seven Story Mountain and Dead Man Walking make priesthood and religious life a romantic thing. Why hasn’t the latter stirred up the same vocational romance as the former? I wish I knew.

There are many reasons why, in the Western world today, our rectories, convents, seminaries, and monasteries are greying and emptying. Conservatives attribute it to secularity, to a lost sense of self- sacrifice, to an incapacity in many people to make a life-long commitment, to the sexual revolution, and to an erosion of faith in the culture. Liberals suggest other reasons: an emerging laity is a message from the spirit about vocations, an all-male priesthood and the ecclesially-imposed discipline of celibacy need an overhaul, and the priesthood and religious life need to take on new forms before we can again in conscience call people into them.

There’s some truth in all of these reasons, though none are the real culprit. What is? We lack a romantic ideal for these vocations. They’ve been subjected to a scorching exorcism and now it’s time to move on. We need to restore to them their angels, their proper light, their beauty. We need to re-romanticize priesthood and religious life and give people something beautiful to fall in love with.