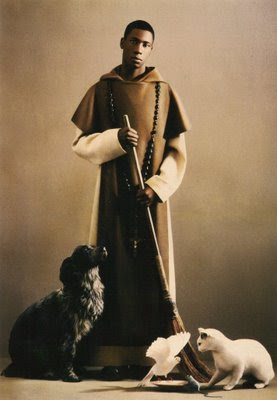 St. Martin de Porres became the patron saint of hairdressers because hairdressing was one of the duties he performed for his brothers in the friary.

Check him out, doesn't he look like the guy who played Jesus in Madonna’s Like A Pray music video?

St. Martin de Porres was born at Lima, Peru, in 1579. His father was a Spanish gentleman and his mother a black freed-woman from Panama. At fifteen, he became a lay brother at the Dominican Friary at Lima and spent his whole life there-as a barber, farm laborer, and infirmarian among other things.

I wonder what I have to do to get canonized as a modern day saint?
Posted by Province of Meribah at Saturday, November 03, 2018