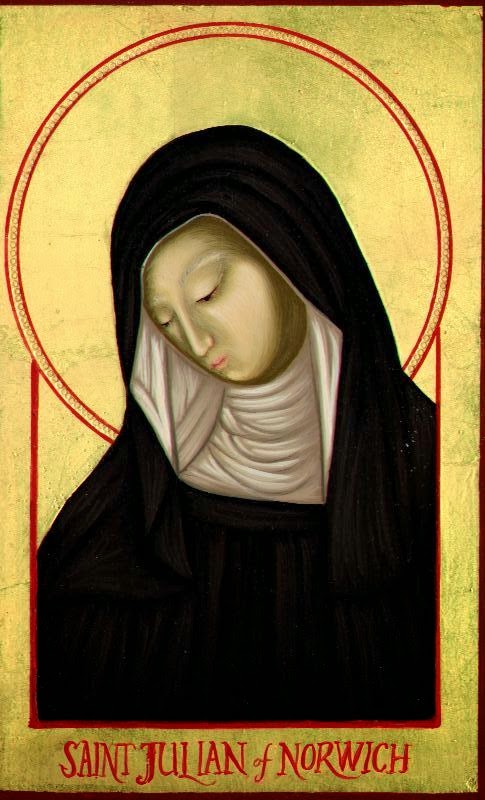 The words are from Julian of Norwich—a woman who has set herself apart for God and lived isolated in a cell. Like her contemporaries of 1373, she was Roman Catholic and believed that the last rites gave special sanctifying grace and strengthened a sick person bodily and spiritually at death. Recognizing her need for a deeper love of Christ, she appealed to God for three things:

• a stronger understanding of Christ’s passion
• a sickness unto death while still young, allowing her to experience all that a body and soul experience in death (including attack by devils and administration of the last rites) but without actual death—so that she might learn to live more mindful of God
• three “wounds:” absolute contrition, kind compassion, and steadfast longing toward God.

It seemed her unusual prayer was being answered. Julian had indeed become deathly ill. Everyone around her despaired of her life. She also believed she was dying. The last rites were administered to her.

Then a wonderful thing happened: Julian experienced what a future generation might describe as a near-death experience. At the crisis of her sickness, she received fifteen “showings,” or revelations. She reported that heaven opened to her, she saw Christ in his glory, and she saw the meaning and power of his sufferings. She also sees Christ’s mother, Mary, exalted and beloved.

In her thirteenth showing, Julian received a comforting answer to a question that had long troubled her:

“In my folly, before this time I often wondered why, by the great foreseeing wisdom of God, the onset of sin was not prevented: for then, I thought, all should have been well. This impulse [of thought] was much to be avoided, but nevertheless I mourned and sorrowed because of it, without reason and discretion.

“These words were said most tenderly, showing no manner of blame to me nor to any who shall be saved.”

In this she recognized the compassion she had prayed for. She was impressed with her need to be joyful in all circumstances, however adverse, and for no particular reason, except this: that all things will ultimately be put right by Christ. She came to such a sense of the awfulness of sin that she reckoned the pains of hell were to be chosen in preference to it. Indeed, to one who recognized the horror of sin, sin itself is hell. “And to me was shown no harder hell than sin. For a kind soul has no hell but sin.”

The following night Julian received a final, sixteenth showing while she slept. In it Satan and his hosts assailed her, but God gave her grace, and she fixed her eyes on the crucified Christ and trusted that because of his suffering and victory over sin he can protect her, and he delivered her from the demonic jeers and mutterings.

She recovered to live thirty-three years longer. Soon after her recovery, Julian recorded a short account of her revelations. Twenty years after her visions, having meditated long upon them, she added additional thoughts to their meaning. Both the short and the long accounts are widely disseminated in manuscript form and, after the invention of the printing press, were published in many editions.

He who has begun this good work in you, bring it to completion.
Posted by Province of Meribah at Monday, June 30, 2014