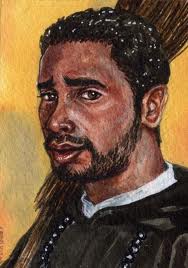 For our Province St. Martin whose feast we celebrate today plays an important role. Our grade school bears the name of St. Martin de Porres and is the patron. On this day the festivities at the school have been curtailed due to Hurricane Sandy. The memory of St. Martin lives on in so many ways.

St. Martin de Porres was born at Lima, Peru, in 1579. His father was a Spanish gentleman and his mother a black freed-woman from Panama. At fifteen, he became a lay brother at the Dominican Friary at Lima and spent his whole life there - as a barber, farm laborer, and infirmarian among other things.
Posted by Province of Meribah at Friday, November 02, 2012