Dorothy Day: The Woman Who Loved Much

Rebecca Hamilton at Patheos has an interesting article about Dorothy Day:

Her sins–and they are many–have been forgiven, so she has loved much. But a person who is forgiven little shows only little love. Luke 7:47 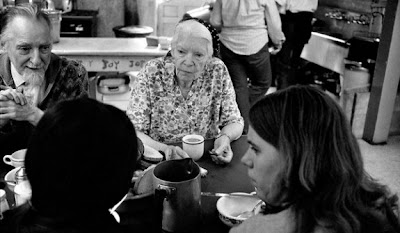 Dorothy Day sets off controversy, even after her death.

She followed Christ as He called her, often to the discomfort and dismay of other Christians who sought a less radical Way. Does that sound familiar? If you spend much time reading biographies of the saints, it should.

The saints weren’t often people’s people. They were too busy being God’s people. The saints are also often converted sinners who had fallen into the muck and mire of their times and taken a good bath there. It seems that God often makes His saints from the worst sinners. It’s as if He can do the most with these edgy people from the pits of life; people who know that evil is real and who see by contrast that God and His love are the only solution to the evil they have known.

Dorothy Day was a converted sinner. She took her turn at living life in the fast lane of the early 20th Century. She ran with the crowd and followed its ways up to and including having an abortion. Then, as people have been doing for 2,000 years, she found Jesus, or, I would imagine, she let Him find her. And that made all the difference.

Dorothy Day lived her life for Christ after that. She founded a ministry to the poor called Catholic Worker Houses. She published a great deal in support of this ministry and did not step back from the requirement of living alongside the people she was trying to help.

Her wary attitude towards government and stubborn pacifism did not always sit well with people in the depression-ridden, war-bound years of the 1930s and 40s. It found even less support during the Cold War years that followed. I suspect Dorothy Day seemed an embarrassment, an unrealistic fanatic, to a good many of the good, church-going people of her day.

It is only now that she begins to make sense. Corporatism is beginning to take a deep toll on the lives of Americans. We have morphed into a country that is continuously at war with an ever-changing cast of enemies. The over-weaning power of government has begun to focus on active legal persecution of the Church itself. These are our times. It appears that Dorothy Day, the uncomfortable convert, is beginning to seem less like a nutty fanatic and more like a prophet for our days.

It is in that prophetic role that she continues to set off controversy. Her life is a flashpoint of disagreement for a lot of people today, just as it was in the past. Some people try to cast Dorothy Day as “their” saint, as an apologist for their personal politics. Other people attempt to disregard her and disown her because they see her life as an attack on their personal politics.

But if Dorothy Day was a living saint, then neither of these reactions apply. Saints live their lives in the service of God, not partisan politics. They don’t try to be popular with people. They set their sights on the narrow way and they walk it all the way home.

The American bishops recently cast a unanimous vote in support of the cause of declaring Dorothy Day a saint. There are a lot of potholes in the road ahead of them in this cause. Most saints are undeclared and unofficial. That’s because, hard as it is to be one, it’s even harder to be officially declared one.

For myself, I have no doubt that Dorothy Day is in heaven. I have no doubt that she lived her life for Jesus and that she was a woman of great courage. Dorothy Day was one of God’s warriors in the battle for life and human dignity. Despite, or maybe because, of her rough beginning, she was one of His best works.
Posted by Province of Meribah at Thursday, November 29, 2012