The Solemnity of the Most Holy Body and Blood of the Lord, or Corpus Christi, celebrates the Eucharist in more focused way than Holy Thursday. It was established by Pope Urban IV in 1264 and its Mass composed by St. Thomas Aquinas. In anticipation of the universal feast, in 1246 the Bishop of Liège in Belgium, had instituted a feast for the Eucharist at the request of an Augustinian nun and mystic St. Juliana of Cornillon.

The feast of Corpus Christi was inspired by a great miracle. In 1263 a German priest, Peter of Prague, stopped at Bolsena in Italy on his way to Rome. He had doubts about the Real Presence of Christ in the Host. At the tomb of the virgin martyr St. Christina, Peter celebrated Mass. At the consecration blood began to drip from the Host. It bled over his hands onto the linen corporal spread upon the altar. Fr. Peter stopped the Mass and asked to be taken to Pope Urban in nearby Orvieto where he was in residence with his court. 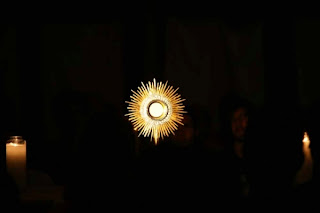 St. Bonaventure and St. Thomas were also there. The Pope listened to the priest’s account and began a complete investigation. Urban ordered the bishop of the diocese to bring to Orvieto both the Host and the stained linen corporal. The Pope made a great procession with the entire papal court out of Orvieto to meet the other procession approaching with the Host and corporal. St. Julianna urged Pope Urban to institute a universal feast and Aquinas, inspired by the Augustinian mystic, drafted an Office and Mass for the new feast day. The relics are still venerated in the great cathedral or “Duomo” of Orvieto which was built for their display, the cornerstone having been laid in 1290. The cathedral and the gold reliquary are wonders of medieval period. 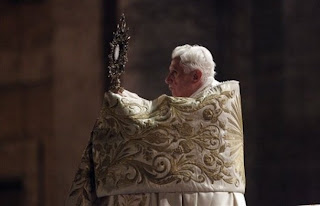 Pope Benedict ended his celebration of Corpus Christi at St. John Lateran with these words:
"Thank you, Lord Jesus! Thank you for your loyalty, which sustains our hope. Stay with us, because the evening comes. "Jesus, good shepherd and true bread, have mercy on us; feed us and guard us. Grant that we find happiness in the land of the living". Amen."
Posted by Province of Meribah at Saturday, June 25, 2011