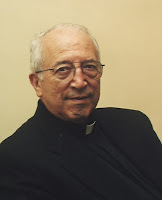 Life Testimony - Fr. Paul Landolfi, SM
Once, when writing an appreciation of Blessed William Joseph Chaminade, Father Paul Landolfi used words that could easily have been applied to his own life as well: “It is a fundamental truth of faith that God is always present in our lives, loving us, guiding us, and revealing himself to us. Usually, when we look back in retrospect, we recognize that God always has been with us.”

In Paul’s case, God’s provident care was intimately connected to the Society of Mary. The beloved teacher, chaplain and spiritual director had 73 years of religious profession when he died in 2017 at the age of 90. But he had actually spent nearly 85 of his years in the company of Marianists, having grown up in an orphanage run by them. He lost his mother when he was only five years old, and his father died a few years later; still, he found in the Brothers’ care a family spirit that sustained and nurtured him as a boy.

Greatly attracted to the life of the Marianists, he entered the postulate at the tender age of 14 and went on to profess first vows in 1944. Brother Paul then continued studies to become a teacher, and served in that capacity at several different high schools before entering the seminary in 1952. Ordained in 1955 at Fribourg, Switzerland, he returned to the United States and continued his ministry as a teacher, chaplain and administrator.

During these early years in the classroom, both his colleagues and the Brothers noted something special about his demeanor and spirituality. It was said that Father Paul never uttered a harsh word or committed an unkind act. Instead, he was revered as someone who practiced the beatitudes in everyday life and was known for being open, gentle and extremely kind.

Father Paul would go on to serve in a variety of ministries, including formation work and a return to his childhood residence, St. John’s Home in New York, where he served as chaplain. Ever an educator and always a learner, Father Paul eventually earned two master’s degrees, one in administration and the other in pastoral counseling.

By the mid-1970s, he was ready to begin a new phase of ministry, beginning a two-decade term in leading the Marianist Spiritual Renewal Center in Pennsylvania. In that role, he designed and provided programs of retreats, spiritual direction and religious instruction – encountering many Lay Marianists who were seeking to deepen their Marianist commitment. Renowned as a most devoted son of Mary, he also became widely known and loved for serving as a gentle guide who demonstrated a genuine, simple joy in all of his encounters.

Deeply respected for his insights into Marianist spirituality, Father Paul once shared thoughts from a “dream interview” with Blessed Chaminade about the unique nature of the Marianists’ vow of stability. Using his “voice of Chaminade,” he wrote, “I wanted Stability to mean [that] members would enter and remain in a state of being much more than in a place…I wanted persons who would not be fixed to a house but would be fixed in a state, the state of being devoted to Mary. That’s what Mary wanted. She wanted dedicated people who would help her. She wanted her sons and daughters to be open and docile to the Spirit of Jesus. This required more than permanence in a place.”

The everyday holiness first noted by the Brothers in the 1940s continued in Father Paul until his death. A resident at Chaminade High School in Mineola, New York, in his final years, he seemed to those around him to be a human stained-glass window of sorts – someone through whom the light of Christ, in all its radiance, persistently shines. Widely known in the Chaminade community as a kind and compassionate confessor, he also displayed an attitude that was bursting with life, invariably engaging those around him into action, thought and prayer. In the end, he died as he had lived, ever in the service of Mary, reciting the words of the Memorare along with members of his community.

Posted by Province of Meribah at Wednesday, July 06, 2022