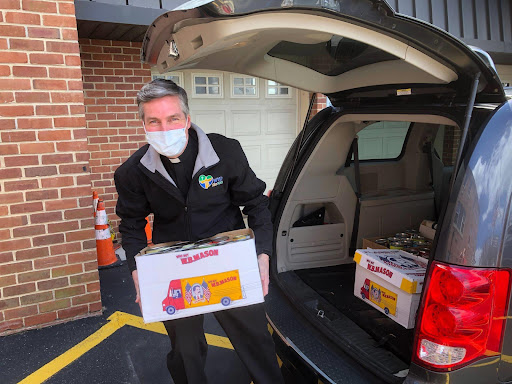 August 14, 1941 - At the age of 47, Fr. Maximilian Kolbe, OFM, Conv. dies two weeks after offering his life in place of another prisoner at the German death camp of Auschwitz.

August 13, 1943 - At the age of 46, Fr. Jakob Gapp, SM is beheaded by the Nazi regime. They wanted him dead because he had been preaching against the National Socialist movement in Germany.

Each August, we celebrate the feast days of these two martyrs on the days their souls entered into their heavenly reward.

As I write this letter, I have just returned from a week of retreat with about 12 fellow Brothers from the Province of Meribah. We read together a book about the Saints entitled, A Living Gospel. I was struck by this question asked by St. Ignatius of Loyola:

He asked this question as he read the lives of the Saints, bedridden for many weeks after a serious battle-injury to his leg.

“What if I should live like that?” Or, we might ask: “How were Blessed Jakob and St. Maximilian ready to die like that?” What brought them to the point of being able to give their lives freely, for the sake of their faith, when each of them surely could have made different choices and avoided their early demise?

That is, everything about their lives was directed toward their ultimate end: union with Christ in Heaven.

These were men whose lives started out normally enough, much like any of ours, but they gradually entered more and more deeply into their faith, saying “Yes” to the offer of grace from Jesus our Savior, and to His Mother Mary’s invitation to collaborate with her in the work of bringing others closer to her Son.

Both men were deeply involved in this world, proclaiming the Gospel with unflagging energy, even when it became lethally dangerous to do so. Yet, both men oriented their entire lives toward eternal life in the world to come.

Thus, Blessed Jakob was able to write in a letter to his family on the day of his execution:

“At seven o’clock this evening, I will go to our dear Saviour, whom I have always ardently loved. Do not mourn for me. I am completely happy. Naturally, I have experienced many a difficult hour, but I have been able to prepare myself for death very well. Live well and suffer everything out of love for God. During this difficult time since my arrest, I have prayed for you continually, and now I will intercede for you in heaven. … Everything passes; only heaven remains.”

Both St. Maximilian and Blessed Jakob had a deep love for our Blessed Mother. On August 15, we celebrate her Assumption into Heaven. St. Maximilian and Blessed Jakob were able to “die like that” because they lived their entire lives focused on being in Heaven with our Lord and His Blessed Mother. In fact, our belief in Mary’s Assumption into Heaven is a key to our own hope of joining her there one day. The Catechism of the Catholic Church quotes Pope Pius XII:

“... the Immaculate Virgin, preserved free from all stain of original sin, when the course of her earthly life was finished, was taken up body and soul into heavenly glory, and exalted by the Lord as Queen over all things, so that she might be the more fully conformed to her Son, the Lord of lords and conqueror of sin and death.” The Assumption of the Blessed Virgin is a singular participation in her Son’s Resurrection and an anticipation of the resurrection of other Christians. (#966)

In other words, Mary is the first to experience that union with Christ in Heaven that should be the ultimate end of every Christian. She paves the way and makes it possible for us as well. Mary’s Assumption anticipates our own resurrection to eternal life.

Thinking about death—especially our own—is neither pleasant, nor easy. But it can be a powerful spiritual exercise to ask ourselves:

Will I be ready when I die, as Gapp and Kolbe were?

If I knew I were going to die soon, is there anything I would change in my life?

Is there anything or anyone I’d be willing to give my life for, as Gapp and Kolbe did?

The powerful stories of Blessed Jakob and St. Maximilian provoke us to reflect on our life, by showing us that our earthly death is only one more step on the journey toward our ultimate end: union with Christ in Heaven.

By shining the light of eternal life on every decision we make and every action we take: “Is this leading me closer to union with Christ and His Blessed Mother in Heaven . . . or not?”

On behalf of all of my Marianist Brothers, prayers for a good summer’s end and many blessings in the year ahead.