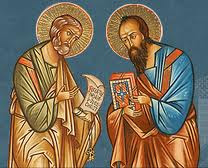 On Monday, June 29,  we remember the apostles Peter and Paul, commemorating not only their divinely inspired writings in the New Testament but also their efforts as apostles of Christ.

Peter was to be crucified, and he requested that he be hung upside down, feeling unworthy to die in the same manner as Christ.
Posted by Province of Meribah at Sunday, June 28, 2020