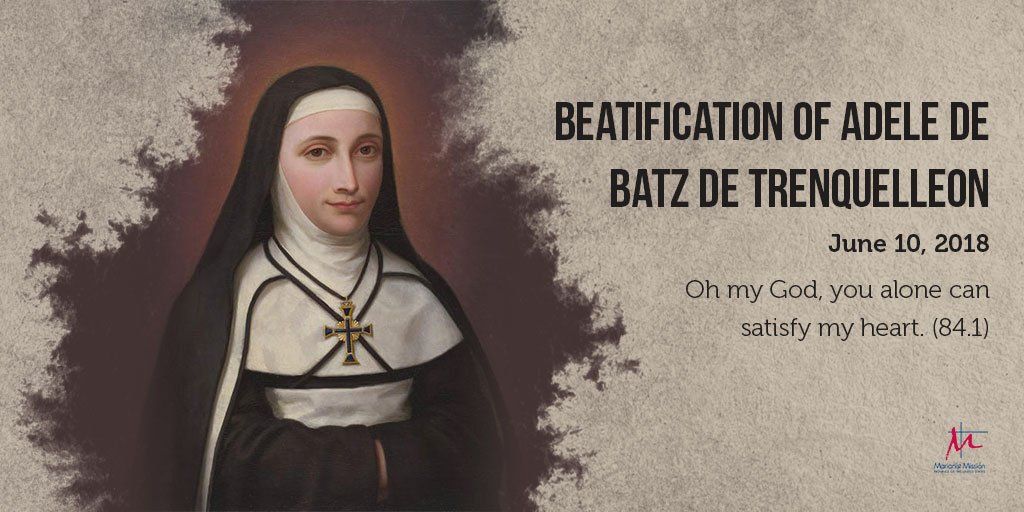 Adele lived in a constant attitude of conversion by her being "Turned towards the Lord" - her eyes and her heart fixed on God .

How often has Adèle heard these words and lived them well! How often does she teach them to her friends in the little society and to her religious sisters! We discover this focus by the many times she quotes it in her correspondence. Sometimes in liturgical seasons, or to lift up spirits when an answer is lacking, or as a cry of alarm when pride or other temptations are lurking. She always invites us to not miss the moment of opportunity.

What were the ways Adele experienced it? Thankfully, her letters tell us much, because of the transparency with which she recounts her experience of God throughout her life. Certain 'favorable moments' leave her with a special grace: the memory of her baptism, her First Communion, her Confirmation, the "Little Society" and her entry into the Congregation of Bordeaux, her meeting with Father Chaminade, her option to choose Jesus Christ coming before a marriage proposal, the illness and death of her father, the fruition of her "dear project" and the passing to eternal Life and meeting her Beloved.

These are some of Adèle's favorable times. But considering her whole life, we can say that she has welcomed and lived each day as a time of grace, a unique moment to respond to Love. She lives in a constant attitude of conversion in the sense that she is "turned towards the Lord" holding her eyes and heart fixed on Him and burning with the desire to make him known and loved.

Fr. Joseph Verrier, editor of Mother Adele’s Positio, a theologian belonging to the Congregation and responsible for the causes of her beatification and canonization, examined the writings of the Servant of God (Adele). He found that she expresses herself in these terms: "In the conduct of the Servant of God, as revealed in her writings, we have not noticed any impulsivity or uncontrolled feelings, elicited by emotionality. Her writings allow us to deduce that a serious selfcontrol and a supernatural motivation, seem to characterize her exterior and interior conduct. "And Fr. Verrier concludes:" It seems to us that the writings of the Servant of God justify a very favorable judgment on her moral character, in the supernatural sense of the term. Indeed, this true Servant of the Lord, reveals herself in them, from her childhood, to the end of her earthly existence, revealing a soul fully aware of the supernatural responsibility that derives from both her full Christian vocation and her religious vocation. She desires to be consistent in a generous and constant exercise of Christian virtues with a full fidelity without concessions, nor compromises to her congregation and her total commitment to the service of God and the religious state". “