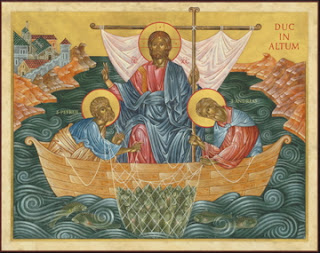 In the fifth chapter of Luke, Jesus is standing by the lake of Gennesaret, and the crowd is pressing in on Him to hear the word of God. At the shore of the lake, he sees two boats — empty because the fishermen had left them to wash their nets. Jesus gets into one of the boats, the one belonging to Simon, and asks him to push the boat away from the shore. There Jesus keeps a safe distance from the smothering press of the crowd and is able to teach them.

When Jesus finishes, he decides to extend his lesson with a dramatic illustration. He challenges Simon, "Put out into the deep water and let down your nets for a catch."

Put out into the deep water, says Jesus. Jesus doesn’t say, "Hey, it’s shallow over here, try this." He’s saying that the real possibilities exist where life gets deep and risky. He invites us to venture out, take a chance, be active and adventurous.

"Master, we have worked all night long but have caught nothing," laments Simon. He sounds like he wants to stay close to shore, safe and comfortable because his time on the water hasn’t yielded any fish. But Simon isn’t going to be stubborn about this. "Yet if you say so, I will let down the nets," he offers. And he does.

The result? Simon and his fellow fishermen catch so many fish that their nets are beginning to break. They call for their partners in the other boat to come and help, and they end up filling both boats to the point that they’re beginning to sink.

It’s an unexpected, amazing and overwhelmingly abundant catch. All because they’re willing to follow Jesus’ words and scout the deep water.

That’s the challenge for us today: to venture beyond our comfort zones and put out into the deep water in lives of discipleship. Too often we stay close to shore, safe and comfortable, when Jesus is calling us to be active, adventurous and willing to explore new territory. That’s where the fish are. That’s where the growth happens. That’s where we can make surprising discoveries about ourselves and the world around us.
Posted by Province of Meribah at Tuesday, February 05, 2019