What an exciting summer we in the Marianist Province of Meribah have just wrapped up!

One of the highlights of our summer, no doubt, was our trip to Poland to participate in World Youth Day. Chaminade and Kellenberg Memorial each brought about sixty students to this international gathering of pilgrims, all assembled together to celebrate our Catholic faith with the Vicar of Christ himself, Pope Francis. We flew into Warsaw; spent two days there; and then traveled to this year’s WYD host city, Kraków. We followed in the footsteps of Pope Saint John Paul II, visiting Wadowice, the place of his birth and baptism, and Wawel Cathedral, where Cardinal Karol Wojtyla served as Archbishop from 1964 until his election to the papacy in 1978.

We even spent a day in the southern mountain town of Zakopane, where our own Bro. Ryszard Decowski was born, baptized, and raised until immigrating to the United States in 1965, when he was six-and-a-half years old! 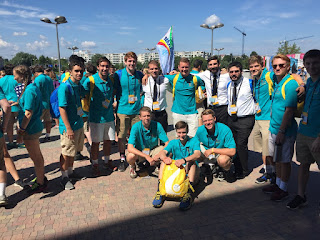 So many strong impressions from our World Youth Day pilgrimage this summer remain with me. One of them is the systematic and often maniacal attempt by the Nazis and then the Communists to obliterate any trace of religious faith from Europe in general and from Poland in particular. This was made clear to me from the photos we saw of post-World War II Warsaw, much of it left in rubble after the Nazi occupation. Our tour of the Auschwitz-Birkenau Concentration Camp, where over a million prisoners died, provided a sobering lesson on the consequences of a godless, hateful ideology that threatened to eclipse basic human rights, the Judeo-Christian tradition, and the civilization to which it gave rise.

Even stronger than the forces of nihilism and destruction, however, are the forces of resistance, resilience, and resurgence, and the history of Poland from 1939 to the present day proves that. At Auschwitz, for example, we prayed at the cell of St. Maximilian Kolbe, who volunteered to die in the place of a stranger at the Auschwitz death camp. (Two days later, Pope Francis would pray at the very same spot.) In Warsaw, we attended Mass at the parish church where Blessed Jerzy Popiełuszko, a martyr for his faith, preached powerful sermons, weaving together spiritual exhortations with staunch criticisms of Communism. 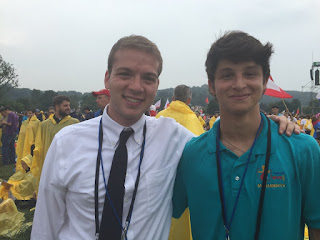 Everywhere we went, we saw indisputable evidence of a Polish Catholic Church very much alive, despite the Nazis’ and the Communists’ relentless – and, ultimately, failed – efforts to suppress it. Kraków boasts the second largest concentration of Catholic churches of any city in the world besides Rome. And further, these churches are not museums to a long-gone age of faith; they are filled with families and young people whose faith is very much alive. And I’m not talking about World Youth Day pilgrims; I’m talking about the Polish people themselves, whose Catholic faith is an inextricable part of their lives, despite fifty years of ruthless attempts to suppress it.

As we exchanged high-fives and chants with over a million World Youth Day pilgrims from all over the world flooding the streets and squares of Warsaw and Kraków, I kept thinking to myself, “I bet those Communists are turning over in their graves!” You can’t help coming away from World Youth Day on a spiritual high. You can’t help coming to the powerful conclusion that Jesus Christ lives, that the Church is alive and well, and that faith matters. It matters very much!

Pope Francis inspired World Youth Day audiences with many thought-provoking and moving talks. He delivered one of his most memorable addresses during the prayer vigil with young people at Campus Miseridordiae (Mercy Field) on Saturday, July 30. In that talk, Pope Francis spoke of yet another force that threatens the faith today – not repression, but indifference. In his own inimitable style, the Pope put it this way:

But in life, there is another, even more dangerous kind of paralysis. It is not easy to put our finger on it. I like to describe it as the paralysis that comes from confusing happiness with a sofa. In other words, to think that, in order to be happy, all we need is a good sofa. A sofa that makes us feel comfortable, calm, safe. A sofa that promises us hours of comfort so that we can escape to the world of videogamesand spend all kinds of time in front to a computer screen. . . . “Sofa happiness”! That is probably the most harmful and insidious form of paralysis, which can cause
the greatest harm to young people. . . . little by little, without even realizing it, we start to nod off, to grow drowsy and dull.

That is the secret, dear friends, and all of us are called to share in it. God expects something from you. Have you understood this? God expects something from you; God wants something from you. God hopes in you. God comes to breakdown all our fences. He comes to open the doors of our lives, our dreams, ourways of seeing things. God comes to break open everything that keeps you closed in. He is encouraging you to dream. He wants you to see that, with you, the world can be different. For the fact is, unless you offer the best of yourselves, the world will never be different. This is the challenge.

Now, while I suspect that many of your college dorms have a couch or two exactly like the one the Pope describes, I also know that so many of you have taken up the Pope’s challenge: You have dreamed big. You have laced up your boots, gone out into the world, and made a difference!

I think of our World Youth Day pilgrims. Many of them spoke candidly of the fears and apprehensions they harbored before leaving for Poland. What would the trip entail? Would I be able to keep up with all the hiking? Would I be ok in the midst of the enormous crowds of total strangers? What about the threat of terrorism?

Well, I am happy to report that every one of our pilgrims embraced the World Youth Day experience with energy, enthusiasm, fervor, and deep faith. Towards the end or our pilgrimage, we had a faith-sharing session back in our hotel. Scores of pilgrims from Chaminade and Kellenberg shared their experiences of the ten days of our trip, of their fears and anxieties before we departed, and the countless ways they had grown in their self-confidence and their faith in God. I’m not exaggerating when I say that this faith-sharing session went for about two hours, and many of the moderators were moved to tears by the candor and sincerity of the testimonies we heard.

I think as well of all the mission trips that many of you reading this letter have made. This summer, I know, one of you spent nine weeks with fellow students from the University of Dayton performing volunteer work among the poor in Appalachia. Others spent time on similar service projects in Mexico and Brazil, and your stories, too, moved me profoundly. I know that some of you have quite literally laced up your hiking boots to walk “the Camino” across northern Spain to the shrine of Santiago de Compostela. Since I have been working with vocations, I have learned of so many marvelous and truly courageous things that so many of you have done to make a difference in the world, to leave a mark, to put your faith into action. I am inspired and humbled by your deep faith and boundless enthusiasm.

I began this letter by noting that we Marianists are wrapping up an exciting summer. I said that for good reason. In mid-July, just before joining us on our World Youth Day pilgrimage, three graduates made their Promises of the Novitiate in the Society of Mary, taking the first step towards a life of prayer and service as Marianists. Bro. Andrew Santoriello CHS ’07, Bro. Peter Sennert CHS ’11, and Bro. Patrick Cahill CHS ’11 have all dared to dream big, to leave their mark on life, to make a difference, to offer the best of themselves. I’m sure you can imagine the joy that their act of faith and courage brings to all of us in the Province of Meribah.

Once again, I am reminded of the Pope’s words during the Saturday-evening prayer vigil at Campus Misericordiae:

You might say to me: Father, I have my limits. I am a sinner. What can I do?When the Lord calls us, He doesn’t worry about what we are, what we have been,or what we have done or not done. Quite the opposite. When He calls, He is thinking about everything we have to give, all the love we are capable of spreading.His bets are on the future, on tomorrow. Jesus is pointing you to the future, not
to the museum.

Concluding his prayer-vigil address, Pope Francis challenged the over one-million pilgrims who had gathered to pray with him and listen to his words:

Today, Jesus, who is the way, the truth, and the life, is calling you, and you, and you to leave your mark on history. He, who is life, is asking each of you to leave a mark that brings life to your own history and that of many others. . . .

Are you up to this?

From what I have witnessed, you are all answering Pope Francis with a resounding “Yes.” God bless you for that!

Posted by Province of Meribah at Monday, September 19, 2016