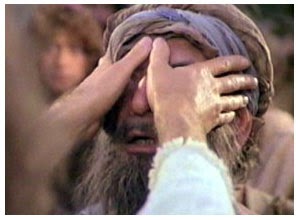 What a strange and wonderful story this is. Jesus refuses to put the label of "sinner" on either the blind man or his parents, but says that "he was born blind so that God's works might be revealed in him." With such an introduction, one might think that Jesus would go on to treat the man with courtesy and respect, but he does exactly the opposite: He treats him like dirt. Jesus spits on the ground and makes mud with his saliva; then he spreads the mud on the man's eyes.

He uses wet, sticky, soft, dirty earth. He uses mud - a symbol of all that is degrading, such as when a person's name is dragged "through the mud." Jesus puts this man in an awkward position. In effect, Jesus may have been the first person to utter the humorous drinking toast, "Here's mud in your eye"; hardly the sentiments you expect to hear from a teacher who is healing by the power of God.

And yet, the man born blind believes. He believes enough to follow the command of Jesus to "Go, wash in the pool of Siloam," and to stumble through the streets of Jerusalem wearing a ridiculous mask of mud. We don't know exactly how far the man has to walk after receiving his mudpack in the eyes, but it could be quite a hike. John tells us that Jesus encounters the man after leaving the temple.

If Jesus puts mud in the man's eyes right outside the temple compound, then the man has to walk at least 500 yards to the pool of Siloam - the length of five football fields! Quite a distance for a blind man to cover, groping and stumbling and trying to ignore the jeers of the crowd.

So, it's not a pleasant walk. It's degrading, embarrassing, humiliating. But the man has been in touch with Jesus, and for some reason he believes. He believes that this teacher who calls himself "the light of the world" is somehow going to bring an end to his lifelong darkness. Besides, what has he got to lose? His pathetic progress down the rocky streets of Jerusalem would be mocked by townspeople whether he had mud on his face or not.

So he goes and washes ... and comes back able to see. The dirt-and-spit opens his eyes, and he proceeds to testify that it was Jesus who gave him his vision. Standing before the Pharisees, he says, "He put mud on my eyes. Then I washed, and now I see .... He is a prophet." When they counter that Jesus is a sinner, the man says, "I do not know whether he is a sinner. One thing I do know, that though I was blind, now I see." And the man asks the Pharisees mockingly, "Do you also want to become his disciples?" He might as well say to these religious leaders: "Here's mud in your eye!"

Finally, face to face with the one who healed him, the man discovers that Jesus is none other than the Son of Man. "Lord, I believe," he says, and he worships him. It is important to note that his healing comes BEFORE this statement of faith. The man does not believe in Jesus prior to his touch; the man receives the touch and then believes. The mudpack inspires the man to trust that he will be healed.

Posted by Province of Meribah at Saturday, March 29, 2014