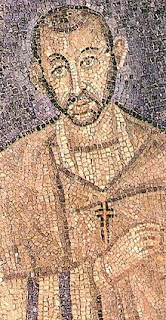 St. Ambrose of Milan (+4 April 397), a titanic figure of the late 4th century who changed the shape of Church and State relations for a thousand years, who brought much of the wisdom of Greek writings to the West, and who helped to bring St. Augustine of Hippo into the fold.

There are too many interesting things about Ambrose for them all to be shared here, but we have space for a couple.

There is a famous moment recounted by St. Augustine in his Confessions (Bk VI) about visiting St. Ambrose.

Augustine walked into the room where Ambrose was sitting and saw him staring at a book! Ambrose was reading and not even moving his lips!

Augustine was so impressed by this that slipped silently out of the room without saying anything to Ambrose, lest he disturb him.

Augustine was very impressed by Ambrose and had wanted to talk to him about various problems and doubts. Because of all the people pressing around Ambrose, who was tremendously important and sought after, Augustine was never able to get near him in public.

Fr. Z from wdtprs
Posted by Province of Meribah at Friday, December 07, 2012