Blessed William Joseph Chaminade's Cause for Canonization: A Possible Cure

The following article appeared in the June, 2009 edition of Via Latina 22, the newsletter from the General Administration of the Society of Mary.
In the Congregation for the Causes of Saints they say that the miracle for canonization comes ten years after beatification. Let’s hope that this is true in the case of Blessed William Joseph Chaminade.

In May 2004, at the age of 24, Rachel Baumgartner was cured of Askin Sarcoma. Rachel was born in St. Louis (USA) in 1983; She is a parishioner of the Marianist parish of Our Lady of the Pillar. At the age of 15 she began to feel the first pains in her shoulder. Since it was a tumor, she received all the medical treatments available. In the year 2000 she made the pilgrimage to Rome with her parish to assist at the beatification of Father Chaminade and to ask his help. But the illness continued to advance. When Rachel was declared incurable by her doctors, in May 2004 she had her last surgery, just to relieve the pain. Her parents, her pastor Father Tobin, and the Marianist community and the parish prayed to Father Chaminade for Rachel’s health. When the doctors examined the extracted tissues, they realized that the cancerous mass was dead.

Since that time, Rachel’s health has continued to improve. Her pediatrician, Dr. Bergamini and Rachel herself are convinced that medical science cannot explain this cure. Rachel believes she received a favor from Father Chaminade. She is a happy young person who radiates peace and who helps other persons to live with hope through their infirmities and problems. Rachel was
married in July 2008 to Gabe Lozano, son of a Catholic family very involved with the Cathedral Parish of St. Louis. Finally, Glamour Magazine chose her as “Woman of the Year” last year, in great part due to her charitable work.

Given the extraordinary conditions of the case, Dr. Bergamini suggested it be studied as a possible miraculous cure. The outgoing Superior General, Father Fleming, asked the Postulator, Father Gascón, to study the case. Father Gascón consulted the Congregation for the Causes of Saints about the seriousness and viability of this process. Having received a positive response from the medical consultor, the Postulator has taken the steps necessary to initiate the cause at the diocesan level. Accompanied by Brother Michael McAward, Secretary General, he traveled to St. Louis last January to speak with Rachel Lozano, Dr. Bergamini, Father Tobin and the Provincial Council of the Province of the United States, in order to pursue this step in the cause for the canonization of Father Chaminade. An attorney, Mr. Gerard T. Noce, former student of the Marianists, has worked at collecting the medical records and the list of witnesses. In a meeting held last January, Father Antonio and Brother Michael communicated to the Apostolic Administrator of the Archdiocese, Bishop Robert J. Hermann, the desire of the Marianists to proceed toward opening the cause of Rachel’s cure. Bishop Hermann received the news happily. The local press has become interested and even published a very favorable article about Rachel, the Marianists, and Father Chaminade.

Given such signs of holiness and goodness in the persons and institutions, the Postulator and the General Council think that we should proceed with the opening of the cause of the cure attributed to Blessed Chaminade. We expect the list of witnesses and the medical proofs at the beginning of summer; so at the beginning of the new academic year we should be able to present to the new Archbishop of St. Louis, the Most Rev. Robert J. Carlson, the formal request for opening, at the diocesan level, the cause of the miraculous cure attributed to the intercession of Blessed Chaminade. With joy and hope, let us pray for this “good cause.” 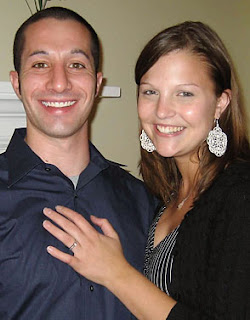 Click here to read the Article on the St. Louis Today Website
Posted by Province of Meribah at Thursday, June 11, 2009